Comparison of retention in toluene

The figure below shows the retention time of C60 and C70 in toluene. Buckyprep, Buckyprep-M and PBB, and PYE nicely separate C60 and C70. On the other hand, C18 with alkyl group and NPE can not separate them in toluene.

Solubility and boiling point of each solvent for C60

The table above shows solubility and boiling point of each solvent for C60. Toluene is the most suitable solvent for due to its high solubility, appropriate boiling point, low cost and low corrosivity. Although C18 columns with alkyl groups can not separate C60 and C70 in toluene, by mixing acetonitrile and toluene, they can be separated as shown in the figure below. However, increasing injection volume in preparative purification triggers tailing that results in a practical injection volume limit of only 70 µl (175 µg). On the other hand, Buckyprep can separate well in toluene with no tailing with a maximum injection volume of 2,500 µl (6.25 mg).

Note: Use after filtration or distillation, if they are not HPLC grade.

Except for alkali aqueous and strong acid solutions, other solvents can be used (e.g., water-free pyridine and others). Depending on solvents, pay attention to high pressure caused by high solvent viscosity. 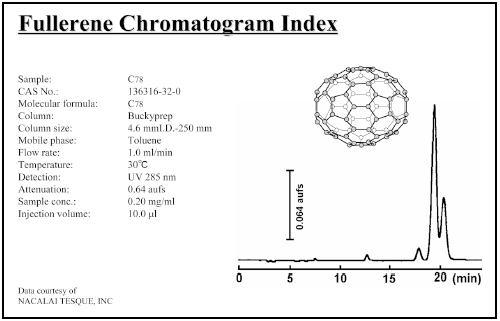