The New Standard for Quantitative Proteomics

Added early in the proteomics workflow Atlas Antibodies QPrEST products generate multiple labeled peptides serving as internal standards for absolute quantification of the corresponding endogenous proteins. Originally designed by the Swedish Human Protein Atlas project the QPrEST standards are produced on demand through metabolic labeling using heavy isotope labeled (15N, 13C) Lysine and Arginine residues resulting in more than 99% isotope incorporation. The QPrEST concentration is determined with high accuracy and precision by MS-analysis through the use of a proprietary N-terminal Quantification Tag (QTag) sequence present in all QPrESTs.

The QPrEST concept has until now been used for single- and multiplex determination of protein copy numbers in HeLa cells and for mapping the murine platelet proteome. Also, the correlation between gene transcript levels and protein content have been investigated using a combination of RNA sequencing and QPrEST methodologies. The QPrEST concept enables accurate and streamlined quantification of the absolute or relative amount of proteins in a wide range of proteomics applications.

Atlas Antibodies QPrEST line currently includes 19,000 products corresponding to >13,000 unique human targets, available to you as absolute quantification standards. All QPrESTs are produced and quality controlled on demand from our in house Human Protein Atlas derived clone collection with an estimated delivery time of three weeks. The products are covered by Atlas Antibodies Guarantee Program and our experienced and dedicated support team are waiting to assist you with order and product related questions.

Comparison of QPrESTTM concept and other types of internal standards

Multiple Peptides in a Single QPrEST

Tired of always testing multiple peptide standards in your MS-setup? With the QPrEST technology you can improve your proteomics workflow by generating quantitative data from more than one peptide using a single isotope-labeled standard leading to better data consistency. All QPrESTs contain a minimum of two (average 3.2) unique, tryptic peptides matching your target protein sequence.

The QPrEST includes a sequence of 50-150 amino acids, with at least two tryptic peptides identical to a human protein target sequence.

Extensive sample preparation can affect the accuracy of your quantitative data. As the QPrEST is added to the protein sample prior to trypsin digestion, the results will be minimally affected by losses during sample preparation, providing you with highly accurate quantitative information based on multiple tryptic peptides. The presence of the QPrEST standard during trypsin digestion also reduces the potential bias resulting from incomplete cleavage by the proteolytic enzyme, a problematic issue for peptide standards.

The QPrEST can be added to the sample at an early stage in the proteomics workflow, decreasing the bias introduced during sample preparation.

Using a special Escherichia coli  BL21(DE3) derivative auxotrophic for Lysine and Arginine the incorporation of 13C and 15N isotope labeled amino acids is comparable to that obtained for synthetically produced peptides and superior to available full-length recombinant protein standards. 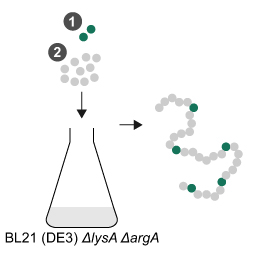 All QPrESTs contain a proprietary Quantification Tag (QTag) sequence that has been used for accurate and precise determination of the QPrEST concentration. For this purpose, we have used an unlabeled, ultra pure and amino acid analyzed QTag standard as the internal reference. All QPrESTs have been quantified through MS-analysis of multiple QTag peptides resulting in measurements of high accuracy and precision matching those obtained from the more laborious and expensive amino acid analysis. We provide our customers with a ready-to-use isotope-labeled internal standard quantified with a precision of +/- 10%. Importantly, since QPrEST quantification is performed against the unique QTag sequence only, contaminating molecules will not affect the concentration determination and complete QPrEST purity is not essential.