The Laminin Marker Panel consists of PrecisA Monoclonal antibodies targeting different laminin subunits.The PrecisA Laminin antibodies are tools to identify specific laminin subunits present in a tissue of interest to further understand the roles and expression patterns of different laminins.
Laminin proteins are the major component of the basement membrane. They are crucial for a wide variety of biological processes, such as cell adhesion, migration, differentiation and phenotype stability, embryonic development and angiogenesis.

The Laminin Marker Panel have been developed in collaboration with Swedish biotech company BioLamina. Biolamina offers full length recombinant laminins mimicking the endogenous environment for cell culture matrices.
The goal for this panel has been to develop monoclonal antibodies that selectively recognize the specific subunit of the laminins. ELISA, Western Blot and IHC validations have been performed in order to select for specificity and rule out any cross-reactivity. The selection already started at the choice of the PrEST Antigens. The criteria for our Laminin antibodies are that they specifically should recognize their subunit but not recognize any of the other subunits.

This is the first release of the Laminin Marker Panel consisting of antibodies that allow for detection of Laminin-111,Laminin-121, Laminin-411, Laminin-421,Laminin-511 and Laminin-521, respectively. Antibodies targeting remaining laminin subunits will be released by the end of 2015. With all different specific laminin subunit antibodies we present a tool for researchers that will aid in clarifying which laminins are present in the tissue of interest.

The complete Laminin Marker panel is presented in our online store, with a feature to combine different antibodies to view the most relevant combination for each customer. A compare view opens larger images of your selected antibodies next to each other.

To see additional images as immunohistochemistry and sometimes more Western blot images, visit the product page for each marker. For example, Laminin-421 consists of alpha 4, beta 2 and gamma 1 and will be detected by Anti-LAMA4, Anti-LAMB2 and Anti-LAMC1 from the antibody panel.

LAMC1, example of the development of specific Laminin antibodies.

The Laminin antibodies have been carefully selected to recognize only one laminin subunit and the antibodies therefore can be used as a tool to detect which specific laminins are expressed in the tissue of interest. The antibody selection process started already during antigen selection phase and has continued throughout the development and QC process.

Here we show how a monoclonal antibody targeting Laminin gamma 1 (Anti-LAMC1) has been developed and selected through our process and can be used to detect Laminin gamma 1 expression in tissue.

All our laminin antibodies have gone though an ELISA-based functional characterization screen to select and confirm that they are specific for only the corresponding laminin subunit and do not cross-react with other subunits. This has been done using ELISA-plates coated with human recombinantly expressed laminins. 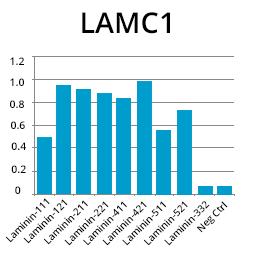 For further characterization we have confirmed subunit specificity in Western Blot application using the same human recombinant expressed laminins as for ELISA. Data below shows that the antibody only detects its specific subunit and does not display any cross-reactivity. 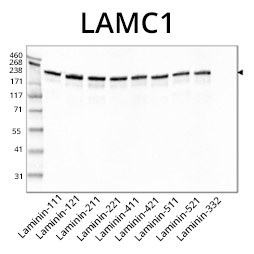 Finally, the antibodies were tested by immunohistochemistry (see below) to confirm protein expression in relevant tissues and absence of non-specific staining.

Taken together the data confirm that the Anti-LAMC1 antibody is high specific and selective for its target subunit in various applications.

Laminin-521, an example how Laminin antibodies can be used for detection and recognition of specific Laminin subunits.

Laminin-521 is one of the first extracellular proteins expressed already by the pluripotent stem cells of the human embryo (Rodin et al, 2010; 2014). Laminin-521 is crucially important for the development and function of several tissues, including heart muscle (Roediger, 2010) retinal epithelium (Aisenbrey et al., 2006) and kidney (Miner 2012).

In adult kidney, laminin-521 is a key component of the glomerular basement membrane (Miner 2012).
The data below demonstrates how monoclonal antibodies against laminin alpha 5, beta 2 and gamma 1 subunits can be used to detect the presence of laminin-521 in kidney. The monoclonal antibodies used for this staining belong to different IgG isotypes, including IgG1, IgG2a and IgG2b, which makes it possible to use them for multiplex IHC on the same tissue section.

For more information on how to use PrescisA monoclonals of defined isotypes for multiplexing IHC studies, see the following instructions for how to perform multiplex staining with Organelle Markers.

IHC-IF. From the left: An overlay image visualizing the three laminin subunits, including LAMA5, LAMB2 and LAMC1 in human kidney. Arrows indicate the laminin-521 expression in the glomerular basement membrane. The individual images show basement membranes staining using Anti-LAMA5 (AMAb91124) in blue, Anti-LAMB2 (AMAb91097) in green and Anti-LAMC1 (AMAb91138) in red. Note that all three subunits are present in the basement membrane of glomerulus, while renal tubules express LAMA5 and LAMC1, but not LAMB2.